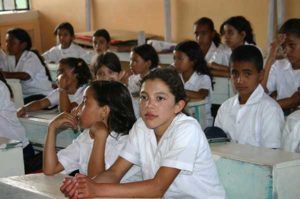 Some positions may require Master’s degrees, while others require only a one-month certificate. Still others, including most teaching posts in China, require a bachelor’s degree with or without a TESOL certificate.

In addition to selecting a country to teach in, you also might want to consider different locations within that country, from globally-known cities to provincial capitals, sea ports or tourist towns. Do your homework. Before you accept a position, find out about both the location and the employer. If you can, try to get a second opinion of the company from the one they are trying to give you. The best advice comes from people who previously worked there, but have moved on. Teaching English overseas can help open doors, depending on what type of organization you would like to work for back in your home country. After teaching in China, I came back and taught at a college in Seattle. I was able to earn a higher salary in Seattle because one of my colleges in China was considered accredited. I’ve also heard that having the word “university” on your resume can help increase your opportunities in your home country when you return.

In general, the oil-rich gulf states are the highest paying region for teaching English abroad. Next comes the Far East, including Mainland China, Indonesia, Japan, Korea, Taiwan, Thailand and Vietnam. In many cases, job postings are placed on line. In Latin America, on the other hand, only a small number of employers post on-line, with many of the better opportunities available only through networking in person. Generally speaking, salaries in Latin America increase the further you get from the US/Mexico border, and the further you get from concentrations of places where large numbers of North Americans vacation or settle.

Due to the arrangement between the European Union and the United Kingdom, most opportunities in Europe, especially Western Europe, go to British Citizens. This may change, however. In late 2016, the British people voted to succeed from the European Union, a movement known as “Brexit”. In the years to come, this may put US, Canadian, Australian, New Zealand and South African teachers on equal footing with British citizens. However, the specifics depend on the details that are now being worked out between the United Kingdom and other European countries.

For a run-down on different countries to teach English, you can watch the youtube video, 21 Best Places to teach English Abroad. However, note that it will be difficult for North Americans to find work in Europe, at least until the rules change that favor UK teachers. In addition, the three Middle Eastern countries mentioned:  Lebanon, Jordan and Turkey, all border Syria, which has suffered several years of civil war.

Finally, if you are thinking about teaching or otherwise working & living abroad, check out the information on the Visa Hunter website.